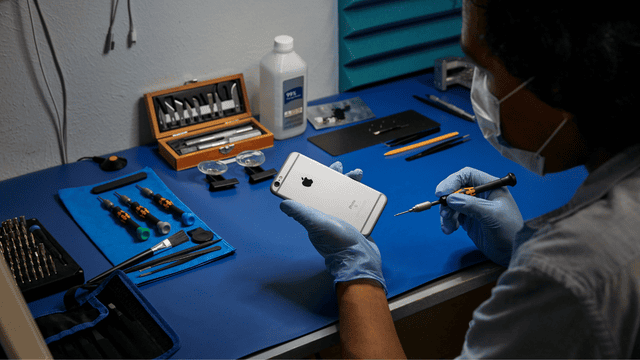 Apple’s Self-Service Repair program, which debuted in the United States earlier this year, has now expanded to eight European countries. Customers will be able to conduct many of the most frequent repairs on the iPhone 12 and iPhone 13 ranges, as well as MacBooks equipped with Apple silicon (not Intel models).

In a news release, Apple stated, “The Self-Service Repair Store enables access to more than 200 individual components and equipment, as well as repair manuals.”

Apple’s Self Service repair stores in Belgium, France, Germany, Italy, Poland, Spain, Sweden, and the United Kingdom sell spare parts and tools. Apple stated that they are the same as those offered to authorized repair providers at the same costs.

If you don’t want to buy a tool for a one-time repair, you can rent one for a week for £54.90. Customers can return replaced parts for refurbishment and recycling in exchange for a credit.

A battery module costs £70.78 (€77.04), a display module costs £282.28 (€327.11), and a camera module costs £168.55 (€192.76). Because an iPhone 13 repair requires a number of tools, including a battery press, display press, adhesive cutter, various torque drivers, and a magnetizer (among others), renting looks like a smart option. It also goes without saying that you should be comfortable with reasonably complex repair jobs.

It’s a wonderful choice for people who live far away from an approved Apple repair facility. Simultaneously, compare the cost of the parts, tool rental, and your own labor to the cost of a professional repair from Apple or a third party.

“We think that the best technology for our customers and the planet is long-lasting technology, which is why we design our products to be robust and require little maintenance or repair,” said Apple COO Jeff Williams. “However, when a repair is required, we want customers to have a variety of options for safe, dependable, and secure repair.”

That’s fine, but Apple was practically forced into this position by right-to-repair laws in both the US and Europe. The EU also wants you to be able to fix items that are more than two generations old. It recently proposed new rules requiring 15 components (batteries, displays, chargers, etc.) to be available for at least five years after a phone is published in the EU, or, in Apple’s case, back to the iPhone X.

The EU recently passed legislation requiring USB-C charging for mobile devices by the end of 2024, which means Apple will have to remove the Lightning connector from iPhones by then. The rule is an attempt to reduce e-waste in the form of cables, as even owning two Apple products (an iPad Pro and an iPhone) necessitates the use of two separate cords.