Anupam Mittal, host of Shark Tank India, recently responded to a fan who said that the new season lacks the charisma of the first one because of where Ashneer Grover had been hiding. 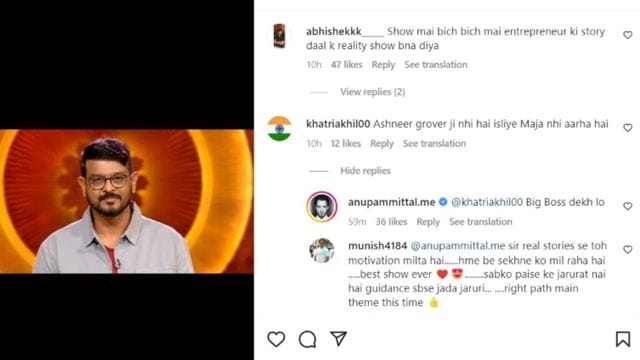 Anupam Mittal from “Shark Tank” recently won people’s hearts by giving a pitcher a job until his shoe brand was ready to get back on its feet. As he posted a video clip from season 2 of Shark Tank that showed the pitcher he hired, his fans praised him for his kind act and the way he helped him plan for the future.

But some people have said that the show isn’t as interesting as it was in the first season, when one of the sharks was BharatPe co-founder Ashneer Grover. Anupam, who helped start Shaadi.com with his brother, answered the fan in his own way.

Well done @ganesh.balakrishnan, everybody is rooting for you & thanks for teaching us the power of being open, honest & accepting. As you and I discussed today ‘success builds ego but failure builds character’. Onwards and Upwards…”

Another fan wrote, “Sir, Shark Tank season 2 isn’t even close to being over. Fake fake jaada lag raha ha (season 2 is not that much fun, looks bit fake). The first season was the most raw and real. Season 2 looks boring, don’t become Indian Idol now. Keep it natural. This is the one thing I would tell all sharks.” Anupam wrote back to him, “Koshish zaari hai,” which means “we are trying.”

The second season does not include Ashneer. During the first season, Ashneer said that Anupam had only built one brand, while he had built three. This made Anupam feel “hurt.”