Aishwarya Lekshmi of PS1 Shared a Photo of Herself and Arjun Das, Prompting Fans to Wonder if the Two Are Dating!!

Aishwarya Lekshmi posted a picture of herself with Arjun Das, which made her fans think that the two of them are dating. See the post by Aishwarya. 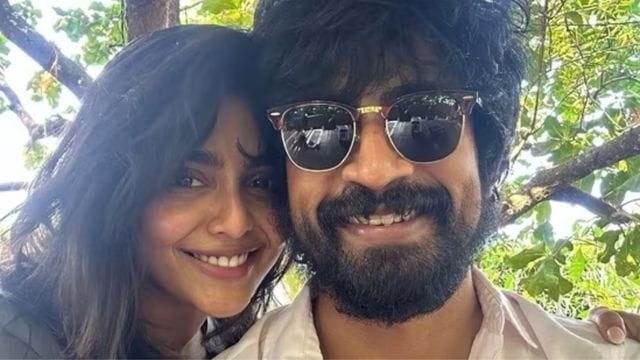 Actor-producer Aishwarya Lekshmi, who was just in Mani Ratnam’s movie Ponniyin Selvan I and the Tamil movie Gatta Kusthi, posted a new photo with actor Arjun Das on Instagram. Without giving away too much, Aishwarya just posted a photo with a heart emoji, which has gotten her fans interested. In the photo, Arjun and Aishwarya are both smiling and looking at the camera.

Some of Aishwarya’s friends in the business left their well-wishes in the comments section, thinking that the actor had confirmed her relationship with Arjun. Actor Priyanka Jawalkar wrote, “Woohoo. I’m so happy for you, @aishu!” “Too cute,” wrote actress Amrutha Srinivasan.

Fans wanted to know if Aishwarya Lekshmi and Arjun Das were actually dating. They went to the comments to find out what was going on. One person wrote, “Please tell me it’s an announcement about a movie.” “Is this really happening?” asked another. Are they seeing each other?

Aishwarya Lekshmi put up a picture of herself and Arjun Das on Instagram.

Gatta Kusthi was the last of Aishwarya’s eight movies that came out last year. In the movie, she played a wrestler who was forced to be a submissive wife until everything went wrong and she could be herself. In 2022, she became a producer with the movie Gargi, which starred Sai Pallavi. After finding one of the best movies of the year, Gargi, she chose to star in Charukesh Sekar’s first movie, Ammu, a scary thriller about a woman who is abused at home but stands up for herself.

Like Thappad and 47 Naatkal, Aishwarya’s Ammu is a very familiar story about a helpless wife being abused by her husband, but it takes an interesting detour to give a new ending. Aishwarya’s next movies are King of Kotha with Dulquer Salmaan and Ponniyin Selvan 2.

On the other hand, Arjun Das was recently seen in Kamal Haasan’s film Vikram. He will make his debut in Bollywood with the remake of the successful Malayalam film Angamaly Diaries which will be filmed in Hindi. In addition to that, he is currently working on a Malayalam film directed by Anwar Rasheed. He is presently awaiting the premiere of his Tamil film, titled Aneethi.

Stay tuned for more news and bookmark our website.

Feeling Worried About What Your Child is Eating? Here Are Helpful Nutrient-rich Foods for Their Development