Today, photographs of Rakhi Sawant and Adil Durrani holding a certificate became viral online (January 11). When we looked at the marriage licence, we noticed that she had changed her name. Check it out! 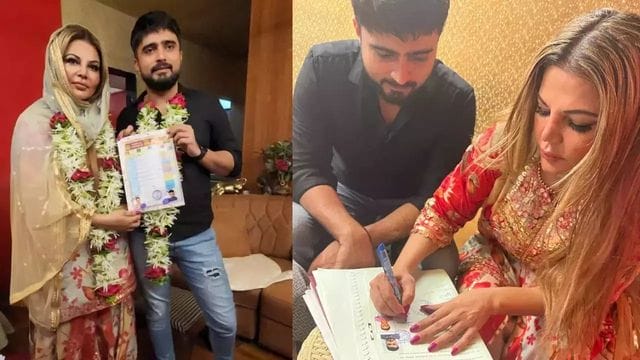 On January 11, pictures of what was said to be Rakhi Sawant and Adil Durrani’s secret court wedding went viral on the internet. Recently, the Bigg Boss star confirmed that anything like this did happen. Reports in the media said that Rakhi and Adil got married in a small court ceremony that was out of the public and media eye. But the fact that the star has also changed her name is what caught our attention.

Rakhi Sawant seems to have changed her name when she got married to her long-time boyfriend Adil Khan Durrani. Telly Talk got a copy of Rakhi’s marriage certificate, which says that her new name is Rakhi Sawant Fatima.

But earlier today (January 11), a picture of Rakhi with Adil Khan dressed up as a bride went viral. The two of them were seen holding a marriage certificate, and the actress confirmed that it looked like they had gotten married. But Adil said that nothing like that had happened.

She finally said something about it, and the reality TV star confirmed that she is married and has proof, like a marriage certificate, to back it up. She cried when she talked about getting married to her boyfriend Adil.

For those who don’t know, Rakhi Sawant and Adil Durrani have been in the news for some time. Rakhi told Ritesh she loves someone else after she broke up with him. Rakhi video-called Adil to show the world who he was while she was talking to the press. Since then, they’ve been seen together more than once.

Rakhi was married to Ritesh before, and they were seen on Salman Khan’s Bigg Boss 15 together. They broke up soon after the show.

In a Promo for Bigg Boss 16, Simi Garewal Stands Up for Shaleen Bhanot and Says, “Don’t Be Hard on Him.” Tina Datta Responds. Watch