After Many hours of outage, Power restored to Austin airport 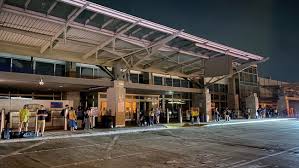 After many hours of the Power outage at Austin airport, Power has now been successfully restored. The airport reported a power outage early Wednesday morning, forcing the airport to ground all outgoing flights for several hours. FlightAware also said that all inbound flights were being held at their city of origin Wednesday.

Austin-Bergstrom International Airport lost of power has been leading to canceled flights and frustrated flyers.

Airport police shut down all entrances to the airport to keep additional individuals from entering the property as no flights were departing.

The outage didn’t force any evacuations but AUS officials tweeted out saying no flights are departing as they worked with Austin Energy to find the cause and restore power.

But by 7:30 a.m., the lights started to come back on at the Austin airport’s main terminal, after a two-and-a-half-hour power outage grounded flights during the facility’s busiest time of day.

Traffic backups were collected along Highway 71 because of the closures. Travelers who had flights Wednesday morning were previously being advised not to drive into the airport, an AUS spokesperson said.

“Airport roadways are temporarily closed while flights are halted due to the power outage,” the airport said at 6:17 a.m. local time. “If you have a flight this morning, the time will change so please check your flight status.”

The airport said it experienced its second-busiest day ever on Friday, processing 34,611 passengers in a single day.

Austin Energy said in an email that underground equipment malfunctioned around 4:30 a.m., leading to the outage. Electricians used fault indicators — devices that light up to indicate a circuit issue — to isolate the cause of the problem.