After England’s Mauling in Adelaide, India Must Return to Square One and Begin Again (T20 World Cup 2022) 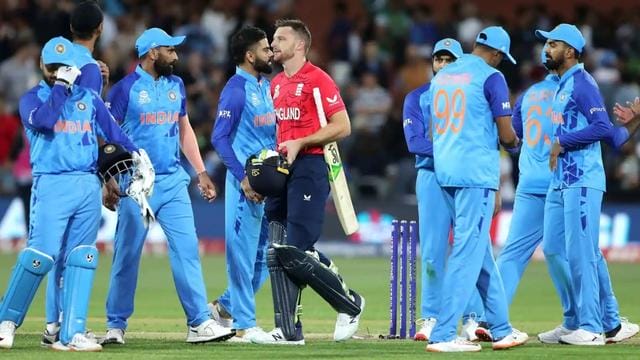 The horrors of a catastrophic Thursday at the Adelaide Oval will tarnish the venue’s generally lovely memories. The Indian squad will remember the Oval for teaching them something new about cricket’s shortest format on a forgettable evening, in addition to some tremendous triumphs in the past.

T20 is unlike any other form of cricket played in the past, and so cannot be observed through any of those lenses at any one time. To learn and excel, the format must be viewed as an entirely independent result of the game, to a considerable part already, and to the greatest extent conceivable in the future.

There will be a lot for the Indian team to think about when they sit down to do a post-mortem on Thursday’s game, and a lot of points are already obvious –

a) traveling with an opening pair that wasn’t in good form,

b) not being consistent with their options for a wicket-keeper-batsman,

c) not giving the best spinner in the traveling contingent an opportunity, and

d) not looking beyond a set of medium-pacers

There are definitely more things to mention, and that will occur as well. But, after all of this is settled, Team India and its sponsors must remember that they’ve been getting a few things utterly wrong about this format for quite some time.

Unlike Test cricket, where there is another session to recover if the first one fails; unlike 50-over cricket, which provides significantly more breathing space; T20 cricket does not provide much of a chance to regain the initiative if it is lost.

It is now the only internationally recognized format in which “reactive measures” do not apply. To be in charge, a team must be ‘proactive,’ setting the narrative with each ball rather than following one.

And that is only possible if

a) form takes precedence over reputation at all times,

c) the fear of a potential loss does not prevent making a brave selection, and

d) serious data-crunchers are brought in to manage/select teams rather than leaving the bunch in the hands of retired players who’ve never dealt with the format.

The problem is a lack of clarity of thought. The kind of clarity that was evident in 2007, under the head of former India Test great Dilip Vengsarkar, when the decision was made to allow a fairly youthful squad – with a decent balance of experience – to travel to South Africa.

The senior players’ were also involved in this decision at the time. After fifteen years, all Indian cricket needs to do now is go back to 2007 and begin anew.

Following Twitter and Meta, Amazon Appears to Be the Latest Digital Company to Lay Off Employees