After Abdu Rozik and Sajid Khan’s Split in Bigg Boss 16, Farah Khan Hosts a Reunion Party at Her House!

After they left Bigg Boss 16, Farah Khan invited her brother Sajid Khan and Abdu Rozik to her house. Many people on social media didn't like that Sajid was in the house, since he was named by several women in the MeToo movement. 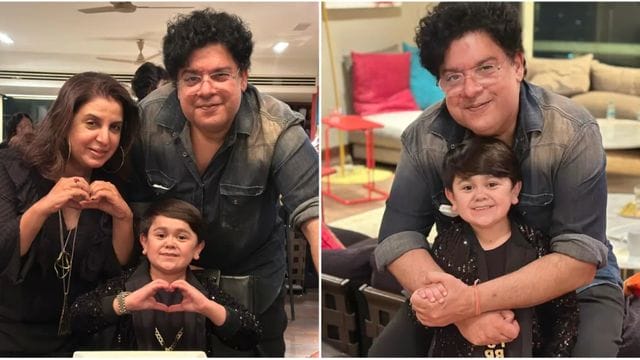 Fans of Bigg Boss 16 were shocked when Abdu Rozik left the show on his own on Saturday. People really liked the Tajikistan singer who went viral, and his absence is already being felt in the house. The next day, Sajid Khan, another member of his group, or “mandali,” also left the show. People say that the director didn’t show up because he had other plans. Now, the two are back together because Farah Khan shared photos of them having a good time.

Farah showed Sajid and Abdu pictures that she had taken of them at her house while she fed them burgers and fries. In one picture, the three of them made a heart with their hands. In another, two of the Bigg Boss contestants posed for the camera while holding hands. Farah wrote, “My two favourites on #BiggBoss16 are @abdu rozik and @aslisajidkhan. Sometimes it’s better to just win hearts. #mandli #family #burgir.”

Farah Khan was recently on the show hosted by Salman Khan as part of Family Week. She had her birthday with the other people in the house. The choreographer and filmmaker were seen talking to housemates and giving them advice. He said that this season was one of the best so far.

Sajid Khan and Abdu Rozik were close from the start, but something that happened on Nimrit Kaur Ahluwalia’s birthday made them stop being friends. Abdu wrote “I Love Nimmi” on his back to show her how much he liked her, but Sajid wrote “I Love T**ti” as a joke. Fans and the show’s host Salman Khan didn’t like this, especially since Abdu didn’t know what was written on his back.

After he left the show, he talked about what happened and said that he no longer trusted Sajid. “In real life, it’s not always good. The whole show, the whole world. My dad and mom seeing. I’m thinking. Bro Sajid said, “Write, “I love Nimrit.” I wished Happy Birthday in this way.

He didn’t tell me (what he wrote). What he’s writing, how I see my back. trust him. I trust bro Sajid. After this, I don’t really trust him. After hearing this, I felt sad, if your best friend only made you laugh by patting you on the back. “It’s not good to put yourself out there like this for everyone to see.

A lot of people didn’t like that Sajid Khan was on Bigg Boss 16 since several women named him during the #MeToo movement. But the FWICE supported him, saying that he had already been banned for a year for his bad behavior and deserves a second chance. The reality show didn’t care about the harsh criticism on social media or what some of the survivors said about him being on the show.

Stay Tuned to the New Times Of India for more Bigg Boss News.

Rakhi Sawant Says That Salman Khan Called Adil Khan Durrani After the News Came Out That They Were Getting Married: “Bhai Ne Mera Ghar Basa Diya”!!

The Delhi High Court Has Issued a New Order Concerning Pathaan, and the Film Starring Shah Rukh Khan Will Premiere on Prime Video in April!