On Bigg Boss 16, Farah Khan made fun of her brother Sajid Khan. She asked him, "Is he a man?" on the show. Look at videos. 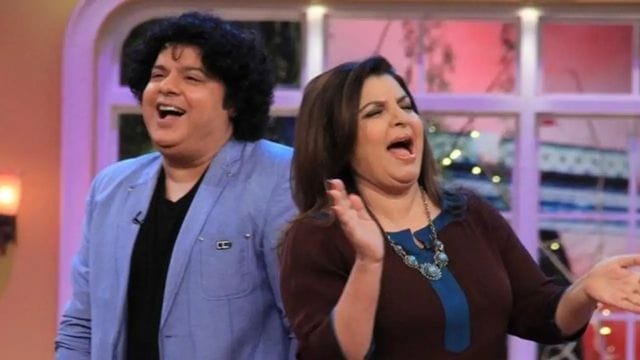 During her appearance on season 16 of the reality show Bigg Boss, the choreographer and film director Farah Khan questioned her brother Sajid Khan on whether or not he is a guy. In a new promotional movie that was uploaded to Instagram by ColorsTV on Tuesday, Farah and Sajid Khan could be seen conversing with each other while the other candidates watched them on television from within a room.

At the beginning of the clip, Sajid asked his sister, “Farah, are you a man? (Farah, are you a man?)” Farah’s reply was, “Yahi sawaal main aapse puchti hun. How about this question? (Kya aap ek purush hai.) Are you a man)?” This made the other contestants on Bigg Boss 16 cheer and holler.

Farah wore a black shirt and matching pants in the video, while Sajid wore a black T-shirt under a denim shirt and black trousers. “Farah aur Sajid Khan karenge aapko entertain apne interview ke saath” (Farah and Sajid will entertain you with their interview) was the caption.

“Brother and sister are roasting each other,” one user wrote in response to the video. “I think Farah is way more entertaining than other Bigg Boss contestants, including Sajid. She must not come as a contestant in Big Boss,” another commented. “Farah just brutally burned her brother,” stated another showgoer. “Farah karegi rock, Sajid hoga shock.”

Farah recently visited the Bigg Boss house to meet Sajid. After meeting each other, the brother and sister broke down. Farah kissed and hugged Sajid as she entered the house. “Mummy is really proud of you,” she added. Farah also met the other finalists and gave romance advice to Sahlin Bhanot and Tina Datta.