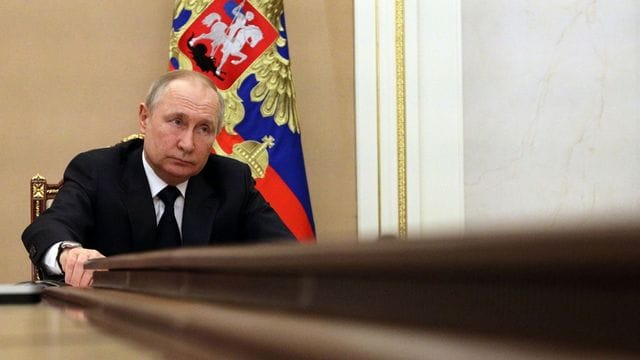 A legislator in St. Petersburg has urged authorities to look into Russian President Vladimir Putin’s use of the word “war” to characterize the situation in Ukraine, accusing the Kremlin leader of breaking the law.

Putin has been referring to his invasion as a “special military operation” for months. In March, he approved legislation that imposes hefty fines and prison sentences for disparaging or spreading “deliberately false information” about the armed services, putting civilians in danger of prosecution if they refer to the conflict by name.

However, he deviated from his typical tone when he told reporters on Thursday, “Our goal is not to spin the flywheel of military combat, but, on the contrary, to stop this war.”

Nikita Yuferev, an opposition councilor in the city where Putin was born, said he knew his court challenge would fail, but he filed it nonetheless to highlight the “mendacity” of the system.

“It’s important for me to do this in to draw attention to the contradiction and injustice of these laws that he (Putin) adopts and signs but does not follow,” he told Reuters.

“I believe that the more we discuss this, the more people will question his honesty and infallibility, and the less support he will have.”

In his challenge, filed in an open letter, Yuferev requested the prosecutor general and interior minister to “hold (Putin) liable under the law for propagating bogus news regarding the activities of the Russian army”. Yuferev, who asked Reuters not to reveal his whereabouts, claimed that Putin critics who publicly termed the war a war had faced serious repercussions.

Yuferev stated that he had previously raised the attention of authorities to the use of the phrase “war” by other significant officials such as Sergei Kiriyenko, deputy head of the presidential administration, and influential politician Sergei Mironov.

He claimed that police told him that after reviewing the allegation against Kiriyenko, they determined he had done nothing wrong and refused to investigate the Mironov issue.

Yuferev claimed he received hundreds of hate letters after releasing his open letter to Putin. However, he stated that he believed the majority of Russians understood what was going on in Ukraine.

“War is a terrifying term in Russian society. Everyone was raised by grandparents who lived through WWII, and everyone recalls the phrase “Anything but war.” “He stated.