A Massive COVID-19 Epidemic in China Has Put a Strain on the Country’s Healthcare System!

Since the "zero-Covid" rules were suddenly lifted in December, more than 60,000 people have died, and many more deaths are expected. 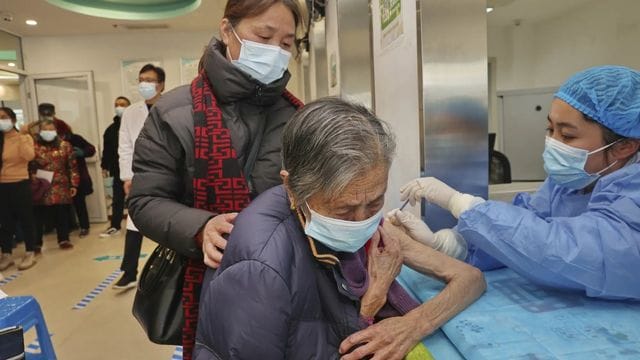 Patients are crammed into hallways, stairwells, and lobby areas, but more sick people keep coming. In a way that reminds us of the start of the coronavirus pandemic in 2020, Chinese hospitals are having trouble keeping up with a rise in Covid-19 cases after the country decided in early December to end its “zero-Covid” policy.

Even though the move loosened three years’ worth of strict rules that had caused rare large-scale protests, it also let the virus spread to 1.4 billion people who had been mostly safe from it. After getting criticism from around the world for not being clear about how bad the outbreak was, the Chinese government said last weekend that 60,000 people had died because of Covid since Dec. 8.

But that number only counts people who died in hospitals, so the real number of deaths could be much higher. Airfinity, a London-based independent forecaster, said on Tuesday that 608,000 people have died in China because of Covid since December 1. This is 10 times the official number.

Dr. Matt Linley, who is in charge of analytics at Airfinity, said, “Our forecast shows that China’s healthcare system will be under a lot of stress in the next two weeks, and it is likely that many treatable patients will die due to overcrowded hospitals and lack of care.”

China overcrowded hospitals in Shanghai, China, which has 26 million people and is the country’s financial center and most populous city. Less than a year after a hard, two-month lockdown to get rid of the virus, the city is now dealing with the effects of letting it out.

China is dealing with an explosive new surge of COVID-19 cases — and the U.S. and WHO have accused the country of underrepresenting this latest outbreak. @janisfrayer joins us on the ground with more. pic.twitter.com/P3dClFnCMZ

When someone dies in the hospital, their bodies are taken to be burned. At one funeral home that NBC News went to, the family only has 10 minutes to say their goodbyes. Relatives walk through the rain to get to their appointed time with flowers and pictures of the dead.

A 31-year-old woman said outside of a hospital in central Shanghai, “My father had no symptoms, but he still died.” Even though her mother has heart disease, the virus kept her in the hospital.

“Thirty-five people died right here the day before yesterday,” said the woman, who lives in Australia. Like other people interviewed, she did not want to give her name because the issue is politically sensitive in China. “Since my mom has been here, I’ve been here every day to see her. When my dad moved into the hospital, almost everyone in the emergency room died.”

She and many other people were shocked by how bad the outbreak was. “It’s a lot worse than I thought, a lot worse,” the woman said. “The virus could kill people, especially older people, even if they have never been sick before.

After almost two years with almost no business, street vendors have set up outside this hospital to take advantage of the increase in visitors. One vendor said, “Most of my customers are the patients’ families, the patients themselves, or the nurses in the hospital.”

Stay tuned to New Times Of India for more World news along with the National News and Bookmark our website so that you can’t miss any updates.

With an Upcoming Software Update, Apple Will Enable Previously Unseen Sensors in the Homepod Mini, and Here’s What They’ll Do!