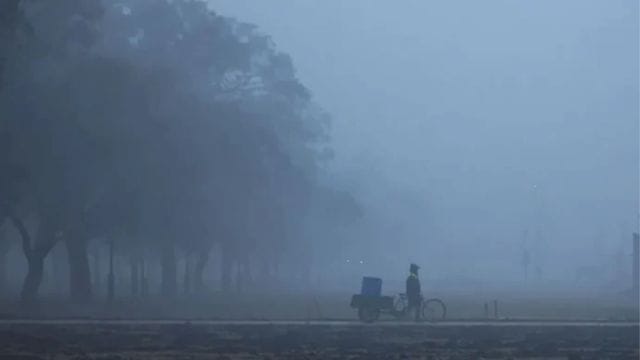 The national capital saw the season’s coldest night to date as the temperature dropped to a low of 3 degrees Celsius early on Thursday morning, marking the night as the season’s lowest so far.

At 8.30 in the morning, dense fog was still present in the city, and visibility was approximately 50 meters at IGI Airport, Palam, and Safdarjung. On Friday, Saturday, and Sunday, the weather prediction calls for fog ranging from moderate to intense.

According to the prognosis provided by the India Meteorological Department (IMD), cold wave conditions are predicted to be present in Delhi on Thursday, Friday, and Saturday. The high temperature for Thursday is forecast to reach around 17 degrees Celsius, which is lower than the average high temperature for this time of year, which is often around 19 degrees.

At Safdarjung, the highest temperature of the day on Wednesday was only 16.5 degrees Celsius, which is three degrees lower than the average for this time of year. The chilly day was also experienced in Delhi. The weather station in Safdarjung serves as a point of reference for the entire city.

According to a representative for the Indian Railways, the hazy weather also caused delays of one and a half to five hours for at least 21 trains traveling to Delhi. Due to the poor weather conditions in Delhi on Monday evening, an official at Indira Gandhi International Airport stated that five planes were rerouted to Jaipur instead of Delhi.

The principal meteorological station in Delhi, the Safdarjung observatory, registered a minimum temperature of 8.5 degrees Celsius, which is a degree more than the average for this time of year. The highest temperature recorded in the nation’s capital came in at 16.1 degrees Celsius, which is an abnormality of three degrees compared to the average.

Apple’s Rumored Virtual Reality Headset Has Its Own Battery Pack!!