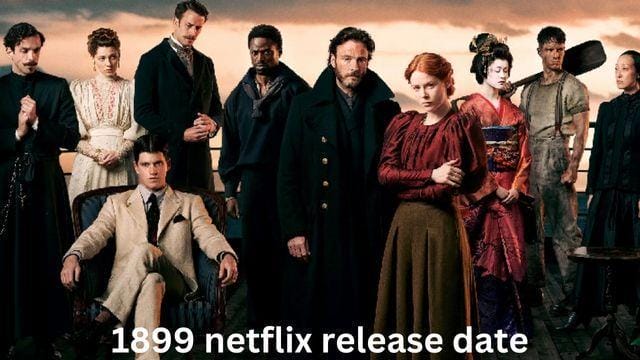 The first trailer for Netflix’s new mystery drama series 1899 has been published, and we think we speak for everyone when we say we’re ecstatic!

The show depicts a group of European refugees whose voyage to start a new life in New York turns into a nightmare when they find another migrant ship adrift on the open sea, created by the team behind the streaming service’s critically acclaimed German sci-fi thriller, Dark. Interested in learning more? Check out the first-look images below, and keep reading for all the details on 1899.

The eight-part drama is set in the year 1899, the same year as Dark, but on a migrant steamer travelling from London to New York with a variety of European travellers on board.

According to the synopsis: “The passengers, a diverse group of Europeans, are joined by their hopes and goals for the new century and their future overseas. Their journey, however, takes an unexpected turn when they come across another migrant ship floating on the open sea. What they discover on board will make their journey to the promised land a terrifying nightmare.”

Showrunners Jantje Friese and Baran bo Odar said of the series: “What drew us in was the idea of having a really European programme with a cast made up of people from various nations. At its core is the question of what brings us together and what divides us. And how the latter can be triggered by fear.”

The series was originally scheduled to premiere on Netflix in 2021, but with an April 2021 production start and a September 2021 wrap deadline, that quickly became unfeasible and the series was pushed back to 2022.

It was confirmed in early 2022 (as part of Netflix Germany’s forthcoming roster) that 1899 will be available on Netflix in the autumn/winter of 2022.

The series will have its international premiere at the 47th Toronto International Film Festival (tiff), with the first two episodes shown. They will debut on September 13th, 2022.

According to the exclusive What’s on Netflix, 1899 will be available on Netflix worldwide on November 24th, 2022. This is a tentative date.

In December 2020, Deadline confirmed that Cannes Film Festival award-winner Emily Beecham has been cast in the role of Maura Franklin in 1899. Beecham is well-known for her roles in films such as Little Joe, The Pursuit of Love, and Cruella.

Dark alum Andreas Pietschmann joined the ensemble cast of 1899 in May 2021, according to Deadline. Pietschmann portrayed an older Jonas in Dark and will play Eyk Larsen in the upcoming series.

Since then, we’ve had a better look at the cast. In 1899, you’ll see the following characters:

Dark’s creators are expected to deliver something fresh and suspenseful. The showrunners, Friese and Odar, teased the plot by saying, “We don’t repeat ourselves, we really dislike that, but it’s going to be a great puzzle for the audience.”

We’re returning to our mystical roots. All of the people on the ship are carrying secrets they don’t want to reveal. It’s put together again like a puzzle. Knowing what we did, Dark, everyone can be certain that this will be something strange, wild, and crazy.”

A Synopsis for the Series is Provided in the Official Press Release as follows:

“The original series centres around a migratory steamship travelling west from London to New York.” The passengers, a diverse group of Europeans, are bonded by their hopes and goals for the new century and their future overseas.

Their journey takes an unexpected turn when they come across another migrant ship drifting on the open sea. What they discover onboard will make their journey to the promised land a terrifying nightmare.”

Another Revised Synopsis Paints a More Complete Picture of the Plot:

“The eight episodes recount the mysterious occurrences that occurred on an emigrant ship sailing from Europe to New York.” Passengers from all walks of life look forward to the new century with optimism.

They are all hoping for a better future abroad. Their journey takes an unexpected turn when they uncover a second ship on the open sea that has been lost for months. What they discover onboard transforms their journey to the promised land into a terrifying mystery. A network of secrets appears to connect each passenger’s background.”

“The whole European perspective was incredibly crucial for us, not only story-wise but also the manner we were going to produce it,” the showrunners stated in an interview with Deadline. It has to be a European partnership, not only with the cast but also with the crew.

We believed that with Europe on the slide in recent years, we needed to provide a counterbalance to Brexit and the rise of nationalism in many nations, and return to the idea of Europe and Europeans working and creating together.”

While Dark was a German programme with dubs in several languages, 1899 is a multi-lingual show in which each cast member speaks their original language. “We felt that with the past years of Europe being on the slide, we wanted to present a contrast to Brexit, and to nationalism emerging in different nations, to go back to the image of Europe and Europeans working and creating together,” Friese explained to Deadline.

“It was critical to stay authentic to the cultures and languages; we never wanted to have characters from different places but everyone speaks English.” We wanted to investigate Europe’s heart, where everyone is from somewhere else and speaks a different language because language defines so much of your culture and behaviour.”

The show was shot in Germany in a cutting-edge “virtual production facility” named “Volume.” Virtual production is a new technique that is also being used in Disney+’s The Mandalorian. It uses a virtual background similar to that of a video game and eliminates the need for a green screen, allowing filmmakers to access any location from their stage via LED screens. On November 24, 2020, Odar released a first look at the show in the form of a lens test from day one of production

“We originally planned to fly to Spain, Poland, Scotland, all kinds of locales,” Friese explained to Deadline. “We rapidly realised [when the lockdown began] that it might not be viable in the new future, so we totally embraced the idea of bringing Europe to us.”

Netflix invested in this stage with the prospect of filming numerous shows on it, including the full first season of 1899. The streaming provider hasn’t announced anything beyond Season 1, but Friese stated that it will be a multi-season show.

The film 1899 will be available on Netflix.

The 1899 teaser debuted on Netflix on June 6, 2022, as part of the weeklong celebration of genre entertainment known as #GeekedWeek. The trailer, narrated by Emily Beecham’s Moira Franklin, features a group of passengers aboard a mysterious ship who are “all running away from something.”
Within the video, smash cuts show a lady being tortured and another woman escaping nervously through the woods, implying that while they are attempting to escape tough pasts, ominous things may be in store for the passengers aboard the ship.